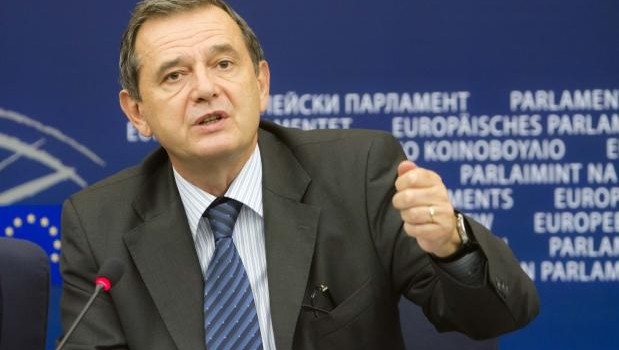 Having a long-established political career in his home country and motivated by his will to actively and directly contribute to Romania’s accession to the EU, Mr Marinescu is a well-respected politician in his home country as well as in Brussels.
After graduating in Aerospace engineering Mr Marinescu started his political journey in 1992 when he became a member of the Craiova City Council for the Democratic Liberal Party (which back then was still called Democratic Party). He was subsequently elected as the Secretary of his Party and, from 1996 to 2000, served as the Prefect of the Dolj County.
In 2007 he became one of the 33 MEPs from Romania and since 2009 holds the office as the Vice President of the European People’s Party (EPP).

UNITEE had the chance to interview him and speak about different topics, from youth unemployment to the crisis of the manufactory sector.

First of all, I wanted to participate to Romania’s accession to the European Union. This was scheduled for 2008 but we met the deadlines and could anticipate it to 2007, which I believe was a great success. Second, during my stay in Brussels as an Observer, I was fascinated by the legislative process and wanted to participate actively in it. In particular, I wanted to give voice to the great added value that I believe Romania represents for the European Union.

I don’t share the opinion that Euroscepticism comes from the institutions. When we talk about communication we refer to a process with two interlocutors, and if the institutions have a communication plan but no one to tell it to, communication fails. The population needs to be interested in the European Union. I am not saying that Euroscepticism is entirely their fault. It comes firstly from politicians that are not able or don’t want to promote the European Union. Secondly, it comes from the crisis, which always pushes the population towards nationalist and extremist movements – and therefore we need growth to get out of it. However, we also need people to be interested and care about the EU in order for them to realise how profitable the EU is.

Yes, there are indeed several issues that need our attention but for the moment the most important one concerns the Schengen Agreement. Romania is not part of it and, in my opinion, this decision is not based on real criteria but rather political ones. Some of the politicians from western countries, because of populist reasons, are not presenting the situation as it is. They are claiming that, should Romania be part of Shengen area, the number of Romanian migrants in the EU would increase. This is completely wrong. The only technical difference between being part of the Shengen area or not is just the fact that you need to show your passport when crossing the border. Also, another national issue that has priority on EU level concerns the Mechanism of Cooperation and verification for Justice which still exists only for Romania and Bulgaria. We are trying to convince that the Romanian institutions are stabilized and are actively working against corruption.

For the moment there is no common immigration policy, but we need to tackle the issue at the EU level. In Romania there is no fear of immigration, first because Romanians are very tolerant people and second because we do not have a great number of immigrants. It is clear that, however, the common immigration policy I am talking about refers to third countries citizens and not to EU citizens, who have the right to move and reside freely within the EU. I am not in favour of those who say we should accept everyone and neither do I support the idea that we should accept nobody. There is an economic need for immigrants to work in the EU, but I also believe that priority should be set upon European citizens first. Another issue concerns illegal work of immigrants that, although it brings profit to some industries because of the law wages offered to immigrants, needs to be fiercely fought against.

No, manufacturing is not the key to European competitiveness anymore but it should become it again. The so-called “third sector”, the market of services, has a limit. Take the case of Ireland – it didn’t enter the crisis because of manufacturing problems but because of banks. And how do we re-foster manufacture? It’s paradoxical, but the answer is: though banks. Unfortunately, the only investment bank left in Europe is the European investment bank. All other ones are risk-averse, but through the past years they received public money which they now should use to participate to the collective efforts of the European economy.

Youth unemployment is a severe problem and has a lot of causes. One of them is, for example, the retirement age which has reached an outrageously high level. Another one is the fact that we send our children to university and they, then, do not want to perform more practical jobs. I am in favour of the apprenticeship programme of e.g. Germany and Austria to get a profession right after high school. Also, we need market studies for education. Why are universities preparing hundreds of engineers for aviation? Is the industry asking for them? We need to grow the economy, to stabilize the pensions fund system and we need a European work market – a strong programme of exchange of manpower between European countries. Concerning particular youth unemployment, the European Union has allocates 6 million to support young people and yes, I do believe that entrepreneurship could be a way out of this vicious circle of (youth) unemployment.

EPP
Group of the European People's Party (Christian Democrats)
MEP
Member of the European Parliament. The MEPs are your representatives at the EU level. They adopt EU legislations and the budget. You elect them for a period of 5 years. The next election is in May 2014.
Entrepreneurship (Entrepreneur)
A person who operates a business and takes on many risks to do so. Entrepreneurs are also innovators, coming up with new ideas and interesting solutions. New companies create more than 4 million new jobs in Europe every year.
UNITEE
UNITEE represents entrepreneurs and business professionals with a migrant background, most of them of Turkish descent, and whom we refer to as ‘New Europeans’. http://www.unitee.eu/