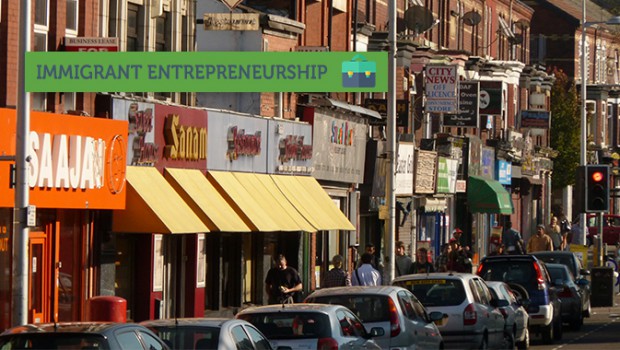 Starting your own business is always a risky endeavour, even more so when you decide to start one in a country other than your own. Immigrant entrepreneurs often face additional barriers and challenges when they decide to become self-employed in their new home countries.

Yet, an increasing number of enterprises in Europe are founded by immigrants. The most successful immigrant enterprises have proved to make an enormous contribution to economic and social processes with their founders transforming an initial disadvantage into a valuable asset.

Immigration in Europe grew considerably in the aftermath of the Second World War as Western European states needed to rebuild their countries and revitalise their economies. At first, large numbers of southern Europeans migrated to the northern part of the continent but as soon as their economies started to boom as well, Turks and Moroccans were recruited to work in low paid sectors of the economy.

However, as economies slowed down due to stagflation and unemployment figures in European countries rose, it was the immigrant population that was particularly affected. Many immigrants were therefore pushed towards entrepreneurship as an alternative way to provide for their families. As a consequence, the number of self-employed immigrants increased exponentially between the 1970s and the 1980s.

Immigrant entrepreneurs initially opened shops at the heart of their communities to cater to the needs of a specific population group. As such, they have often been able to create and expand niche markets in immigrant communities through the establishment of small and medium-sized enterprises that contributed greatly to local economies. Nevertheless, as years went by, entrepreneurs with a migrant background have increasingly set up shop outside their own circle.

As a result, enterprises founded by people with a migrant background play a key role in society, both economically and socially. They create employment for immigrants and natives, foster integration, and generally bring more diversity to society.

In addition, by speaking both the language of the country of origin and the language of the country of destination, immigrants can act as a bridge between cultures and play an instrumental role in developing business ties between these countries. In this sense, immigrant entrepreneurs have frequently managed to turn the initial disadvantage of not being native speakers of the dominant language in a country into a valuable asset.

Especially Polish, Romanian and Bulgarian nationals have been active in this respect as they accounted for approximately half of the 121,748 start-up companies that were set up by immigrants in Germany in 2012.

Moreover, a Centre for Entrepreneurs and DueDil report published earlier this month found that one in seven UK firms was founded by immigrants. The study underlined the vital role these companies play in British society by stating that they employ 14 per cent of Britain’s labour force.

Additionally, it concluded that the percentage of entrepreneurs among the migrant population was considerably higher than the one for natives, a trend that has also been spotted in many other European countries including France, Spain, and Norway.

Since immigrants, in general, seem to be more inclined to start up a company, all Europe needs to do is hand them the tools to operate their own businesses and eliminate existing barriers. In the past, immigration laws prohibited foreign nationals to work as independent traders, which meant that they had to register their enterprises under the name of a native.

Even today, a number of European countries do not offer equal access to self-employment for immigrants and it is of the utmost importance to remove these obstacles as quickly as possible. As immigrant entrepreneurship is on the rise in Europe, surely we can help them make their businesses a success and give credit where credit is due.

niche markets (Mobot)
Arm gesture simulating Mo Farah’s unique way of celebrating which has become his trade mark.
niche markets (brain drain)
Buzzword for a significant emigration of educated or talented individuals. It can result from turmoil within a nation, from there being better professional opportunities in other countries or from people seeking a better standard of living.
niche markets (Ethnic niche)
A market for people from a particular background whose needs are not adequately catered to.
niche markets (Ethnic stratification)
A system of structured inequality in which people receive different amounts of society’s resources based on someone’s ethnic group.
niche markets (Tracking)
Separating children into different classes according to their academic ability.
niche markets (Niche market)
A focused, targetable portion of a market. It addresses a need for a product or service that is not being addressed by mainstream providers.
Stagflation
Term used in economics to describe a situation where the inflation rate is high, the economic growth rate slows down, and unemployment remains steadily high.
Entrepreneurship (Entrepreneur)
A person who operates a business and takes on many risks to do so. Entrepreneurs are also innovators, coming up with new ideas and interesting solutions. New companies create more than 4 million new jobs in Europe every year.