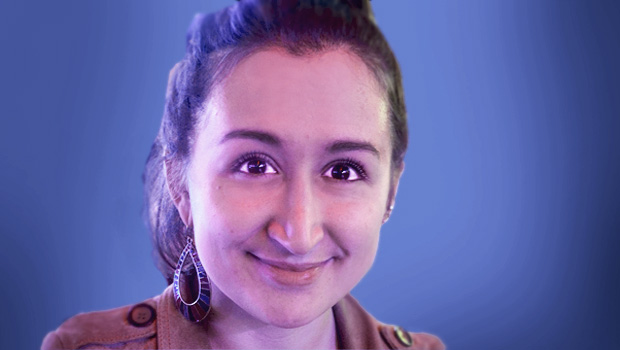 Hafida Maghouti is a young Belgian film student of Moroccan origins. She has just finished filming a Documentary on New European girls with a Moroccan background living in Belgium.

Born in Belgium and raised in a “traditional” Moroccan way, she found herself caught, like most New Europeans, between two cultures: “Growing up I realised that I did not have the mentality of over there, and not really the one of Belgium either.”

She then started to struggle with her identity and her place in both worlds: “I had the feeling I wasn’t at home anywhere and I have often heard in Belgium and in Morocco: “Go back to your country!” For a long time I asked myself: “Where is my country?” But growing up I realised that on the contrary, I belonged to both countries and that was what made my strength. I realised that I could take the best out of the two countries”

And so, Hafida started a process to find her balance. Her documentary “Transition” was a stepping stone towards finding herself as she felt this project was therapeutic for her: “I decided to make this project to confront my personal point of view on identity crisis with the point of view of other girls from the same background. I was looking for answers and I learned a lot about myself and humans in general.”

“Transition” showcases girls between the age of 15 and 25 years old debating with Hafida on what it is to be a daughter of immigrants. “What was interesting is the fact that the youngest never really thought about it. The others could see more or less the gap between who they were and who they really wanted to be and I thought (perhaps naively) that all girls were seeing this gap too. But every individual is different and that’s what made the interviews a real human experience.”

Her double culture influences her work in a very positive way, as she is inspired both by Western film directors such as Woody Allen or Terrence Malick, and by her oriental origins as she often writes short scenarios featuring characters with oriental background.

This double cultural background helped Hafida define her personal filming style, as she wants to showcase human interactions with a focus on their mind-set: “In no way I want to stage an “Arab” character and limit him to just being Arab. If a character is named Ahmed or Arnaud, the gist of the story should not be just there! The mind-set of the character prevails over his culture and origins.”

Over all, she wishes to continue exploring human interactions though her work. This she will do through her future project of “social capsules”, in which she will collect testimonies, life tips and anecdotes that people would like to share with the world. “I would like to use my skills and passion to make people realise that they are not alone in their sorrows and their bad experiences, and that they also share their joys and their little pleasures of everyday life with the rest of the world.”

Hafida wishes to work also in the humanitarian field, making documentaries about socio-cultural problems that exist around the world and direct a film fiction showcasing minorities without victimising or stigmatising them.

Hafida’s story is truly inspirational for anyone having a double culture and struggling to find their identity.