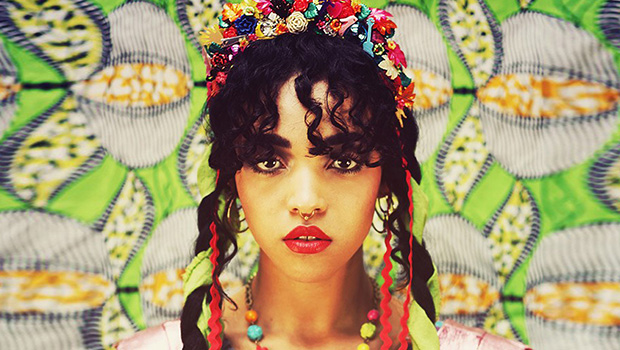 A few years ago, Tahliah Barnett was making a name for herself as a go-to dancer in huge pop music videos. But it was not enough. Barnett, now known as FKA twigs, was not satisfied and is now restoring pop music’s image that is recently somewhat rusted.

Lights, camera, action! Twigs is stepping into the limelight with LP1, a powerful and praised by critics debut album. With her iconic style and her songwriting that blends dark musical production with ethereal melodies, Barnett is a visionary new voice.

The 26-year-old singer and producer was born and bred in the Southern-Western English County of Gloucestershire. But do not be fooled, she is not ‘just’ an ordinary English countryside girl. Twigs’ father is Jamaican and her mother, a former dancer and gymnast, is half-English and half-Spanish. She made her colourful background her strongest asset, using it at its fullest in order to create what people and musical critics later describe as an “I have never heard something like this before” genre.

As the only mixed-race girl in her Catholic school, a natural rhythm propelled Barnett to dancing and ballet classes and towards an eventual dancing career for international pop stars such as Jessie J, Ed Sheeran and Kylie Minogue; the clicks of her bones made when in motion cueing her stage name, Twigs. As she worked as a backup dancer for the Australian pop singer, Kylie Minogue, Twigs was working on her own second self-produced record, EP2. “It was very humbling”, she says. “It is genuinely good to be in one environment where everyone is waiting on you hand and foot to another one diametrically different, where you are one of the twenty backing dancers in a cold room and no one has fed you for several hours”.

On top of being a genre trend-setter, Twigs moved inch by inch toward artistic autonomy, teaching herself how to use the software necessary to (co-)produce many of her songs. She defines herself as a goal-orientated perfectionist who has “to learn everything there is to learn”. “I love music, so I wanted to produce, write and serve it. I have had to learn about EQ frequencies, programming, space and clutter; and how to be a better piano or bass player. Everything”, she says. Her promising debut album LP1 has numerous productions credits alongside Bruno Mars and Eminem music producer Emile Haynie and Paul Epworth, the Oscar-winning Adele Collaborator who also worked with the English indie-rock band Florence + the Machine.

A genuine artist, she writes what she thinks, no matter how raw or disturbing the subject of the song can be. “I write lots of things and then pull out all the fluff words” she explains. She despises this “bizarre time in the world, where one can be very famous, but none of it is their own vision”. She categorically refuses to sacrifice her creativity control and is determined to extend it wherever possible. Popularity is not one of her priorities, she would never give up on anything for the spotlight. She is part of the elite caste of artists such as Bon Iver, James Blake and Franck Ocean –amidst others, artsy and creative, who put out their imagination the way they want.

Undoubtedly, a bit of fresh air highly needed in times of formatted and empty music. LP1 is a boundary-pushing ode to creativity, building its strength on weightless vocals, intimate beats, and quiet spaces that explode in a powerful blast. Twigs, like a rough piece of coal, turned into a glimmering uncut diamond, made her colourful cultural heritage her strongest asset for it made her who she is now: a gem.

Interview excerpts taken from the Guardian  and from Pitchfork.

Share the post "Ethereal, Disarming and Raw: Meet the New European who is redesigning the Music Industry, FKA Twigs"