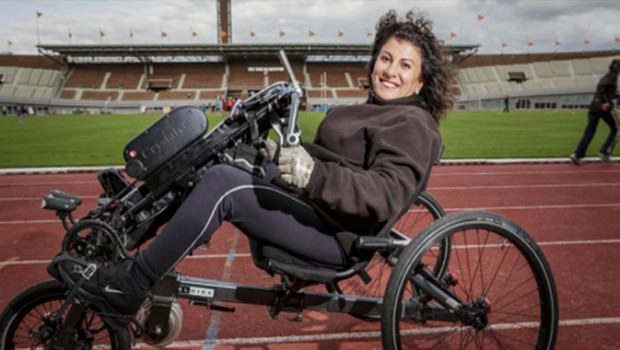 It is often said that in times of adversity people show their true colours. In the case of Funda Müjde, it has become clear that she always looks at life through rose-coloured spectacles.

Seven years ago, the Turkish Dutch actress suffered a car accident which left her with paraplegia. In spite of this, she has never considered taking on a quieter life: “My world did not end with the accident.”

Born in Adana, a city in the south of Turkey, Funda moved at the age of seven with her family to the Netherlands to be reunited with her father, a migrant worker.

She developed a passion for acting at an early age and has become known for her role as Derya Usta in the Dutch drama series Vrouwenvleugel, which won the award for best Dutch television programme in 1994.

In 2012, Funda had a recurring role in the most popular Dutch soap series ‘Goede tijden, slechte tijden’, a part she played in her wheelchair.

Besides a successful acting career, Funda is also an accomplished comedian, presenter, and columnist. Up until August 2012, she wrote a weekly feature titled ‘Funda!’ for national newspaper De Telegraaf.

After her accident a long rehabilitation process followed, but this was no reason for Funda to take it easy. Only eight weeks after the car crash, she had already written a new article!

This summer, Funda will undertake the biggest challenge of her life: she is going to cycle from Amsterdam to Istanbul on a Berkelbike. “The freedom that I experience by riding a bike is the reason for this adventure. And it is worth the pain. By making this journey, I have the feeling that I can conquer myself.”

Apart from a personal triumph, the cycling tour is intended to raise awareness of the importance of exercise. “Exercising is extremely important, especially for people with a disability! I hope that by me moving a lot I can be a role model for other people to become active.”

It is no coincidence that her cycling tour takes place this year as it marks the fiftieth anniversary of her father’s first arrival in the Netherlands. “I want to make the reverse journey my father made with 100,000 other workers to Europe and the Netherlands”, Funda explains. “I would like to connect both countries, my birthplace and my new home… with my Berkelbike.”

Considering that Funda’s last name, Müjde, means ‘good news’ in Turkish, it may be clear that the ‘Stichting Bewegen Is Leven’ (Moving is celebrating to be alive) foundation could not have found a better ambassador to convey their positive message!

Watch Funda’s inspiring video in which she explains why she decided to embark upon the journey of a lifetime:

Share the post "Funda Müjde: “I hope that I can be a role model for other people to become active”" 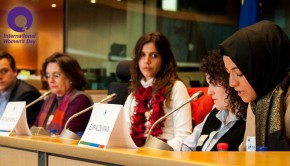 Berkelbike
combination of a handcycle and a recumbent bicycle