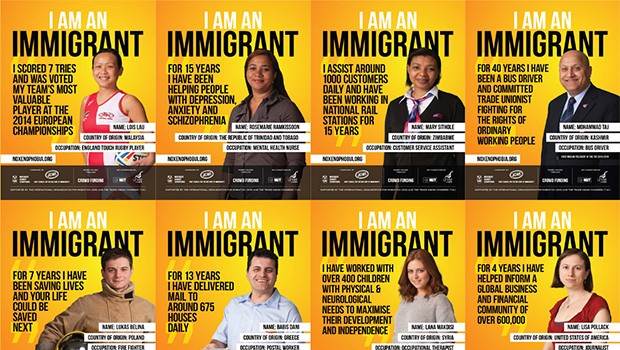 Published on April 22nd, 2015 | by Pierfrancesco GENNARO | Credit: I AM AN IMMIGRANT

The “Meet the New European” section of our blog has, since its creation, portrayed European personalities who, through their multiple cultural and linguistic background, have reached high positions in their professional and social development; in other words, they have become inspirations for us all.

We have written about their successful lives and important achievements: from the iconic British-Iraqi architect Zaha Hadid to music sensation Tahliah Barnett-FKA Twigs, from Italian footballer Mario Balotelli to multi-awarded entrepreneur Melody Hossaini, UNITEE has always decided to tell stories of single new Europeans. With this article instead, we want to talk about the everyday New Europeans, those people who conduct a normal life, that are among us and that without them our society could not be the same: the “normal” New Europeans.

We have decided, then, to talk about two different campaigns that have been recently merged; one launched by MAX – Movement Against Xenophobia, the other by IOM – International Organisation for Migration. These initiatives are both aimed at challenging the negative rhetoric against immigration and, at the same time, highlighting the added value migrants bring to our society, by showcasing their positive impact all around the world.

It all started with the MAX campaign “I am an Immigrant”: an online website, where everyone can share positive stories of immigrants, has been created.
The concept behind the project is the following: to provide a platform where, say, a fire fighter from Poland working in London or a Zimbabwe-born customer service assistant helping people for the past 15 years, can share their simple yet effective stories on the added value they bring to society.

Then the IOM got in the game and decided to team up with the MAX campaign: Migrant Heroes was then initiated.
The Migrant Heroes Campaign will run throughout 2015 and it will culminate with the presentation of 10 prominent migrant profiles during the IOM council taking place next November. Then the voting will be opened and, among the shortlisted candidates, the first top three will be declared Migrant Heroes.

This will not only be a mere title, but it will bring responsibilities with it: the three selected migrants will also become IOM Goodwill Ambassadors, meaning that they will be in charge of spreading worldwide the message of solidarity in order to counter negative perceptions of migrants as well as to create a positive environment for migrants.

Who is eligible to become a Migrant Hero?

A Migrant Hero should belong to at least one of the following categories:

If you fit into these categories then you could be the next Migrant Hero!

At the aftermath of the last tragedy just few miles from the Mediterranean island of Lampedusa, we felt important to celebrate the “normal” immigrants, those who struggled to reach our continent. Their achievements might seem almost irrelevant if we compare them to the big-name New Europeans, but their daily lives, the fact they have not become neither rich nor famous and the fact that their jobs are essential to the general scope of society make them heroes not only for their local communities, but for us too.