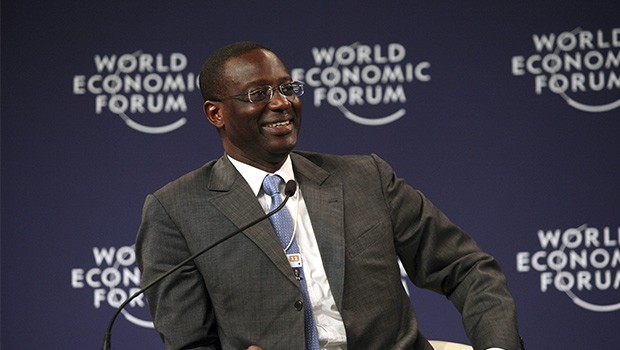 The road from Côte d’Ivoire to Switzerland is long. If you add intermediate stops in Morocco, France, United States, again France and United Kingdom, then it could become quite a journey. Well, this is Tidjane Thiam’s astonishing personal journey from his birth, fifty-two years ago, to becoming CEO of Credit Suisse.

Which is why UNITEE wants to celebrate the success of a European citizen who, thanks to his obstinacy and commitment, was capable of reaching the highest peaks in the financial sector and whose carrier, at the age of 52, is far from being over.

Son of a Senegalese who migrated to Côte d’Ivoire (who was also Minister of Information of Côte d’Ivoire) and with a mother coming from an influent and prestigious Ivorian family (the Ivorian capital city was named after her family), Tidjane Thiam has been in contact with culturally diverse environments since his birth.

When Mr. Thiam was 4 years old, his father was nominated Ambassador of Côte d’Ivoire to Morocco. That led him to live, for more than ten years, in Rabat where he spent most of his childhood and where his natural flair for success started being visible to others.
Being the last of seven children gave him a competitive spirit towards his siblings, but also among his classmates. As an example: Thiam’s parents, whenever their children were the best in their classes, decided to reward them with vanilla icecream. Tidjan never missed a single icecream.

After this experience, he came back to Côte d’Ivoire and got his baccalauréat at the Abidjan Lycée Classique. It was time for Tidjane Thiam to move on and keep his relentless march towards the peak: he was accepted, as the first Ivorian ever, at the most prestigious French “Grandes Ecoles”: first, he graduated at “Polytechnique”, then at “Les Mines” to finally obtain an MBA in Business Administration at “INSEAD-‘Institut Européen d’Administration des Affaires”. All these high-profile institutes were and still are known for their strictness and selectiveness but mostly for their ability to forge the world’s future ruling class.

Ending his first experience in France, he entered the World Bank’s Young Professional Programme and moved to the United States. While in Washington DC, he met Annette, an Afro-American from Pennsylvania who would later become his wife and who followed him to Paris when the program was over.

In 1994, during his second stay in Paris, an event that marked his life-course occurred: the former President of Côte d’Ivoire asked him, personally, to have dinner with him.
From dining with the President, to embark into political life in his native country, it was a short step: at the age of 31, he directly became the CEO of the National Bureau for Technical Studies and Development and, at the age of 36, he was appointed, by the President, Minister of Planning and Development. He was back to his homeland.

His years in Côte d’Ivoire were marked by bold decisions and important economic reforms such as the promoting private investments for the development of the country’s infrastructures or the renovation of Abidjan Airport, judged by many as courageous moves.

With the 1999 Ivorian “Coup d’Etat”, it was time for him to return to Europe and settle in the UK. As a Franco-African man in the City, we could think he might have faced some problems; well, as the President of Lloyd’s ones told him: “the problem is not that you are black, it’s that you are French”. For him that was a good news.

In 2002, he started working for Aviva, the multinational insurance company, where he was Senior Executive. He later joined Prudential, world leader in the insurance sector. As Mr. Thiam does not know what coming second means, it was not a surprise when, shortly after, he was appointed Chief Executive of Prudential in 2009. He became the first black person to lead a company listed at the London Stock Exchange and, starting from june 2015, he will become the CEO of Credit Suisse. His achievements are frankly striking.

Today, Tidjane Thiam is a testimony of talent stemmed from diversity and multiculturalism waiting to be unleashed; he is indeed a great example of a New European success.

New European (Parliamentary calendar)
The annual calendar of the European Parliament, where you can find all the voting sessions and various meetings the Members of the European Parliament must attend. Click here to have a look at the 2013 calendar.
New European (New Europeans)
People with a migrant background, who live and work in a European country and, in most cases, do not intend to go back to their country of origin. Their future is, rather, in Europe
Multiculturalism
Describes a community made of multiple cultures. It can refer to the cultural diversity in the demography of a certain place or organization, e.g. schools, businesses, neighbourhoods, cities, or nations, or to ideologies or policies that promote diversity.
UNITEE
UNITEE represents entrepreneurs and business professionals with a migrant background, most of them of Turkish descent, and whom we refer to as ‘New Europeans’. http://www.unitee.eu/