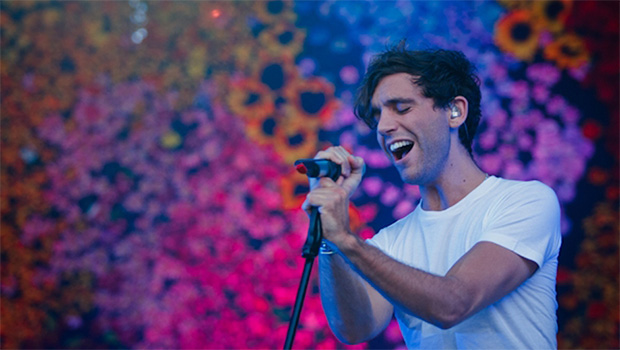 Michael Holbrook Penniman, Jr., popularly known as Mika, is off to superstardom in all of Europe with his catchy and flamboyant pop songs. His artistic style and upbringing is deeply rooted in his migrant background. Enter the strange and beautiful world of this New European singer’s music.

“I have always been very proud of where I came from and who I am, and being Lebanese is a big part of that”. Born in Beirut with an American businessman for a father, a Lebanese mother, three sisters and one brother, the 33-year-old pop singer is proud of his diverse roots.

But what is prominent is his Lebanese identity, despite being forced to leave Lebanon with his family when he was still a baby due to the civil war in the 1980s. “Anyone who is any part Lebanese will tell you the same thing: the Lebanese completely takes over”.

On how the war and being Lebanese influenced his music: “There is a survival trait [to being Lebanese]… In Lebanon, there will be bombs being thrown, but the restaurants will shut down only when they have to. There is this mentality that if you are going to cry, you stand on the table, throw your hands in the air and scream as loudly as you can and you deal with it. I think it has affected the way I make music: these extremes of emotion”.

Growing up in Europe

“If there is an ounce of Lebanon in your family, it will take over… Ours is a Lebanese household: there is incense burning; you will get fed within 10 minutes”. Despite living in Paris for a while during his childhood and growing up in London since he was nine, Mika was brought up in a Lebanese household.

Aside from the war back in Lebanon, the Pennimans moved from one country to another for a while due to the ups and downs of Mika’s father’s business. This made him turn to the Arts and make music not because of the money. “Because of the moving around, because of the having a lot and then having nothing and then having a little bit and then having nothing…for one thing, I developed this real fear of money. I have a fear of decadence when it comes to creative things, because I think that things that are really good should never cost a lot of money… I did not want to be rich, I just did not want to be afraid. It meant that my sisters and I all turned to the arts. We operated as a unit”.

Growing up in London and adapting to the British culture was difficult for Mika. He was bullied by other children and had to switch schools several times. He was also diagnosed with dyslexia and was a generally shy child, although he felt fearless when he took on theatre acting. He considered himself an oddball, but in a positive light.

“From the age of about 10, my mum made me practise every day. She was extremely tough with me. I think she knew that I would have a hard time in normal situations… She realised that my oddness had some sort of purpose. She realised how I was very insular as a child. Socially extremely insular, but creatively, extremely loud”. When he was home-schooled by his Lebanese mother, he learned how to sing and play the piano. These were the formative years of his musical gift.

The singer’s music career can be considered a “collective act of artistic creation” of his big family. His mother makes his stage clothes, one sister is his visual artist, and another is his stylist.

Aside from his musical and artistic talents, Mika is an avid art collector and is multilingual: he can speak fluent English, French and Spanish, as well as Italian and Lebanese Arabic.

The Strange and Beautiful World of Mika’s music

“There is this whole world that goes with my songs… I had no concept of who would listen to my music. I did not know how I was going to be perceived, so I created a world for the music to live in”.

After the immediate success of his first album Life in Cartoon Motion and his single Grace Kelly in European and international pop charts back in 2007 followed by two more albums, numerous concert tours, and musical projects, this multitalented New European remains humble. “I have no delusions of grandeur. I know that I write pop songs, and I know that I am meant to be doing what I am doing because I realised it made me tick as a little boy. I have always been incredibly driven”.

Most of his songs are inspired by his childhood, upbringing and the ups and downs in his life. Each of his albums “has joy, fragility, and a little hint of bitterness”, with song lyrics that have been regarded as strange yet flamboyant. “You do things to make you smile. You live in a weird little world of your own. Because that is all I have ever known”. He tries to make each song he writes a chaotic mix of light and dark, empowering themes, with an artsy twist. “Visual references are very important to me. I write a bit of a song, I will do a little drawing… I indulge in the fact that none of it really makes sense to begin with”.

Despite increasing criticisms and supposed ‘trashiness’ of pop music nowadays, the New European singer tries to make “pop music in the purest sense of the word… I fully embrace the fact that I make pop music. I am totally unashamed about it”.

Aside from working on his fourth album and doing concerts in all corners of the world, Mika keeps himself busy by being one of the judges of X Factor Italy and The Voice France.

Share the post "The Strange and Beautiful World of Mika, a New European taking over Pop Music in Europe"