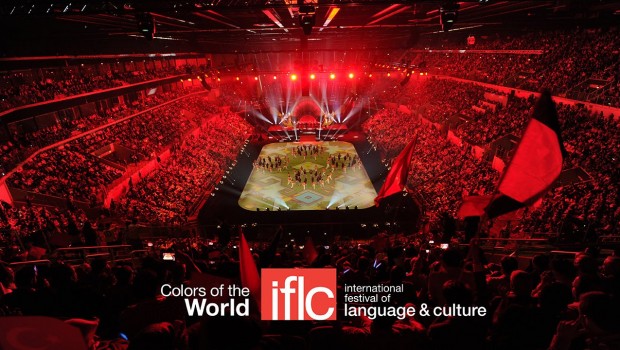 The 13th edition of the International Festival of Language and Culture passed by Brussels for the first time. The show entitled “Colours of the World” took place on 6 June, at Forest National. The event was even broadcasted live on Belgian public television (RTBF – La Trois).

The International Festival of Language and Culture (IFLC) is an annual celebration among youth with the mission of uniting nations of the world with universal human values by rising on the wings of art and music and promote peace, love and cultural encounters throughout the world.

It had been named as Turkish Language Olympiad until 2013, then has been changed as International Festival of Language and Culture. Since 2013, the Festival has already visited all the continents as it went to Morocco, Indonesia, Albania, Senegal, Tanzania, Mozambique, Kyrgyzstan, France, South Africa, Philippines, Thailand, Mongolia, United States of America, Germany, Ethiopia, Turkey (twice), Romania, and now Belgium.

Considering that the IFLC aims at promoting cultural diversity through music and languages, Brussels appeared as an essential stage. As a matter of fact, with more than 100 different languages spoken, Brussels is one of the most diverse places in Europe. The European capital promotes a positive and inclusive image of diversity. The festival’s objectives such as intercultural interaction, multilingualism, multiculturalism, living together culture and respect for differences truly comply with the European values.

Organising such an event is always a good way of conveying important values like promoting research, learning, exchanging information in support of peace, friendship, and understanding. Not only does it bring a lot to the children who participate as performers but it also catches the attention of and helps spreading the word amongst tens of thousands of people enjoying the show from the stands or watching it live on television.

During this closing gala, 350 children coming from 60 different countries performed for an audience of more than 7,000 people. The young performers showed the extent of their talent in various fields such as dancing and singing.

Held under the Patronage of the European Parliament, the Festival attracted some prestigious personalities of the European Union and the Belgian Federal Government who attended the event.

Founded in 2010, Beltud is an association that aims at strengthening the friendly Belgian-Turkish relations by using the culture in a broad sense as a vector for rapprochement. That is why UNITEE was particularly happy to have Beltud participating in its Culture United Festival that took place on the day before the “Colours of the World” show.