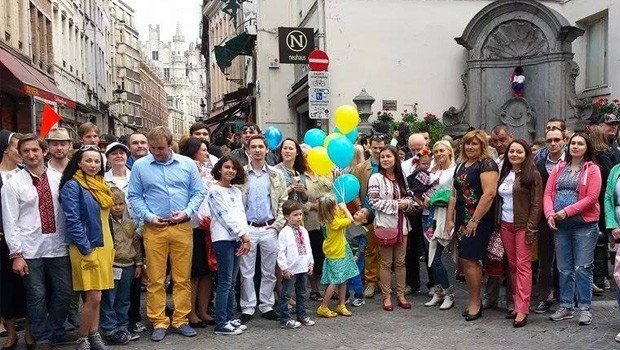 Did you know that Belgium was home to a large Ukrainian community?

Probably not, because most Ukrainians are not as “visible” as many other migrant communities. They do not wear a turban as the Sikh would, or have other exotic specifics. Not only do they dress and look similar to most Western Europeans, but they also share the same values that characterise modern and democratic states.

We interviewed Dr. Marta Barandiy from “Promote Ukraine” (an NGO promoting civil society of Ukraine in Belgium) to further explore Ukrainian culture and to discover more about the activities of the Ukrainian diaspora here in Belgium.

“Ukraine is Europe, not only in terms of territory but also in terms of mentality. Ukrainian values are friendship, humanity and justice like those in Belgium or in Western Europe, not to mention the fact that Christianity is by far the largest religious group both here and in Ukraine.”

“Additionally, concerning the characteristics of Ukrainian society, the importance of the relationship between parents and children and the respect for elder people, play a crucial role and are respected by the whole population”, says Dr. Barandiy.

Most of us, even those who do not follow the news regularly, are aware of the current conflict happening in Ukraine and the reaction of Ukrainians living there.

But how about the reaction of the Ukrainian diaspora in the world and in particular of those Ukrainian nationals living here in Belgium?

According to Ms. Barandiy, “Ukrainians strongly identify themselves through their culture”, and since the beginning of the revolts, national feeling and patriotism cover a growing importance in Ukrainains’ identity and culture.

“Many Ukrainians living abroad supported Euromaidan, Kiev’s symbolic square where the demonstrations of those supporting the path of Ukraine towards the EU happened. Now these people are supporting Ukraine in all possible ways. They raised their voice in different countries of the world through peaceful protests and charity events. Volunteers inside the country who help those people in need, made contacts with Ukrainian diaspora of different countries in order to seek its help. And we had a great response worldwide.”

The Belgian Ukrainian community alone raised more than 50.000 euros during different charity events to support those back home. This money is being put to good use, by being invested directly in humanitarian aid projects aiming at providing medication and clothing for Ukrainians in difficult situations back in their home country.

Promote Ukraine is extremely active in organising events ranging from traditional evenings to screenings of films, but also more political round table discussions and debates. Their main goal is to keep supporting the population living in Ukraine financially and, most of all, to keep Ukraine on the political agenda of Belgium and European institutions.

To know more about Promote Ukraine and to support the association, you can find their website here.